If you are trying to create a lithology model composed of horizontal beds that have been eroded and then overlain by a layer of soil, fill or even material such as concrete, you’ll often find that the horizontal lithoblending algorithm incorrectly places this upper layer of material below the sediments in some places.

One solution is to use some newer tools in the Lithology menu to create two separate Lithology models that can then be combined.  Here is an explanation of how this works. 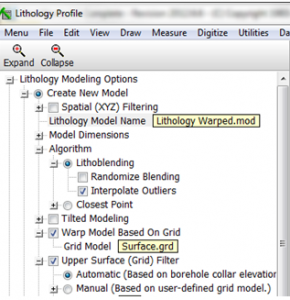 In the Lithology modeling tree menu, choose to create a model titled “Lithology Warped”.  Warp the model based on a grid that represents ground surface elevations, and turned off the “Randomize Blending” option to avoid interfingering of the soil and sand below.

While the representation of the sediments is probably not reasonable, I think that the soil layer at the top of the model looks much better in the diagram below than it does in the diagram above. 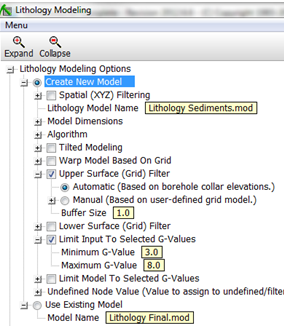 Next, create a model of just the flat lying sediments (in this example, the model is called “Lithology Sediments.mod”).  When creating this model, turn the Randomize Blending option back on, the warping option OFF, and tell the program to limit the model to just materials with G-Values between 3 and 8.

As you can see in the diagram below, RockWorks has included everything except for Soil in this model. 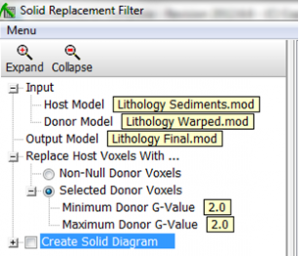 Finally, use the Solid à Filter à Replacement Filter tool in the RockWorks Utilities, to insert the Soil in the warped model into the sediments model.

The diagram below displays this final model in a cross-section.