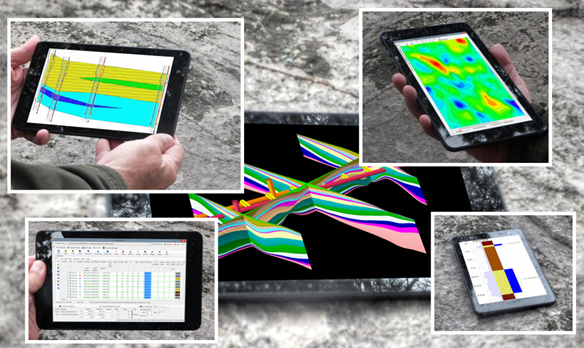 We’re currently finalizing the following free additions to RockWork16 (Level-2 and higher) for use with Windows7 or Windows8 compatible tablets and laptop computers.  These additions include the following three new utilities featuring tablet-friendly (large) buttons & fonts;

The remainder of this posting will describe each of these three new additions in detail;

The Column Parameters menu that is used to define column titles and content now includes an option titled “Pick List“. 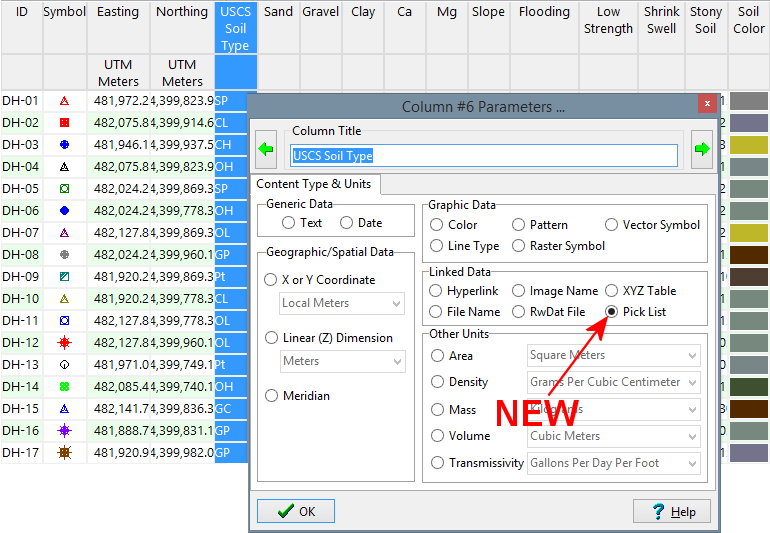 This new “Pick List” designation works like this: If the user clicks on a cell within this column, the program will look for a text file within the RockWorks Tables folder whose name is defined by the Column Title and a “.PickList” suffix.  In the example above, that would be “USCS Soil Type.PickList”.  If the file exists, the program will load the contents into a pop-up menu similar to that shown below. 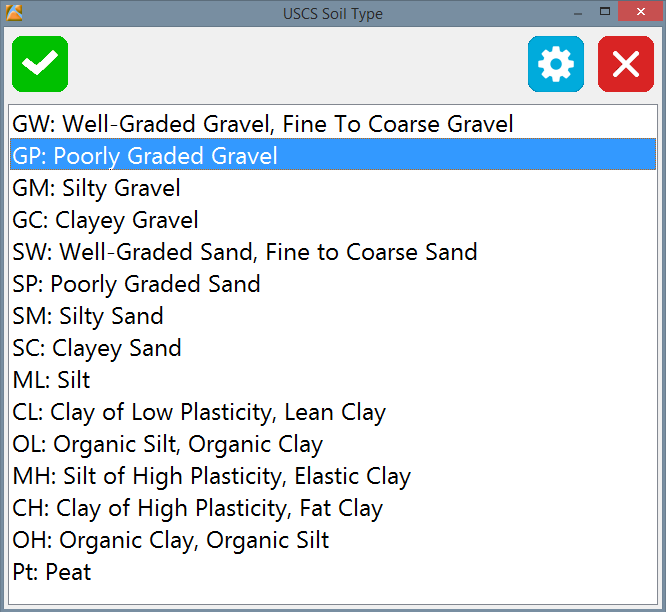 The pick list uses the new tablet-friendly (e.g. big buttons, big fonts, and simplified interface).  From here, the user can click on an item to copy the text into the datasheet cell and close the pick list menu.  Another way to pick items is to use the cursor keys to select the desired item and then click on the green check-mark button.  If you don’t want to select an item press the red X button.  If you wish to change the font size or menu size, click the blue gear button.  Examples of the five-possible font sizes are shown below.  The larger sizes may seem obnoxious, but you may change your tune if it’s cold, and you’re using a 6″ tablet, and you’re over fifty. 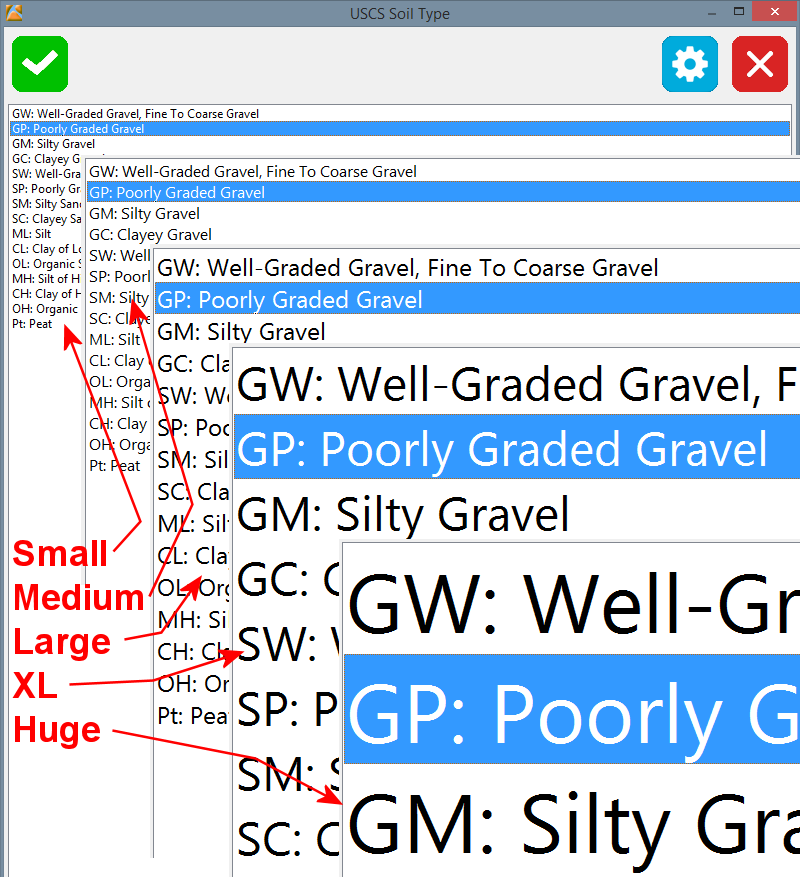 RockWorks currently includes only one Pick List (USCS Soil Type.PickList) but you are free to add your own or send us your list and we’ll add it to the Tables folder.

Tip: If you want to add or edit an existing table and don’t know where the Tables folder is located, click on the Help / About / Diagnostics button.  This will provide a list of folder locations.

This Pick List capability also applies to the new Row Editor described below.  Between the new Row Editor, Sensor Detector, and the Pick List, we think we’ve made a pretty good stab at making RockWorks a bit more “tablet friendly”, especially on smaller tablets. 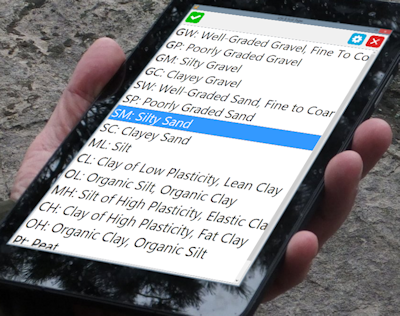 A new program called the “Row Editor” has been added for editing rows of data within the RockWorks datasheet in a data-entry format.  Unlike previous RockWorks menus, the Row Editor uses large fonts and buttons for easier viewing and data-entry on tablet computers for field acquisition and processing. 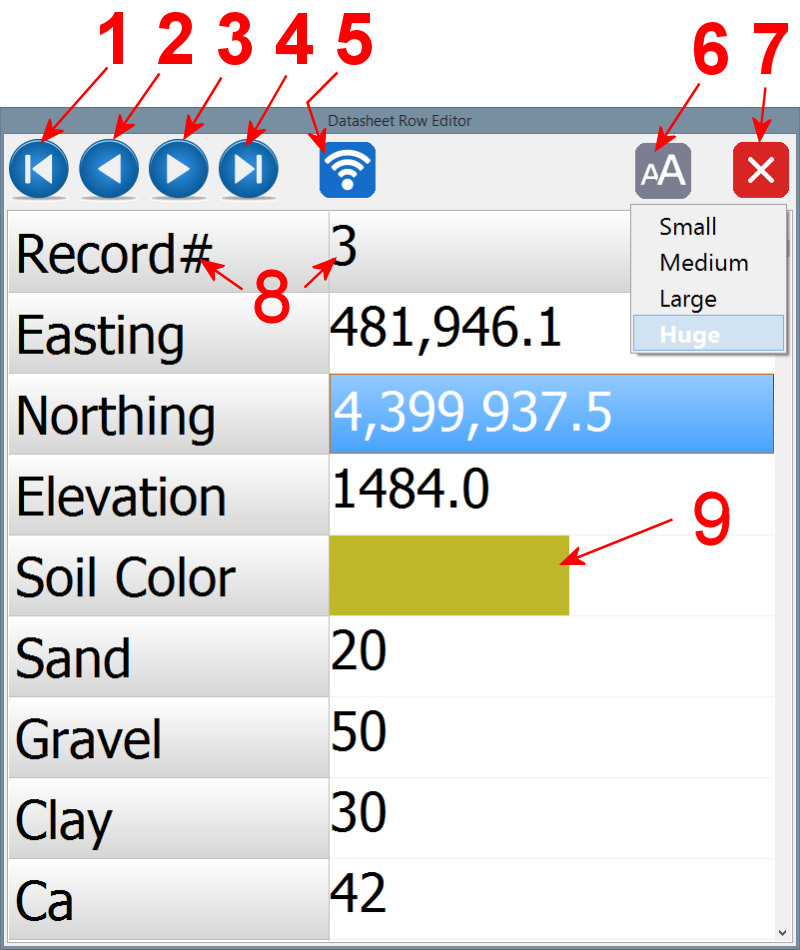 The menu items within the Row Editor are described as follows; 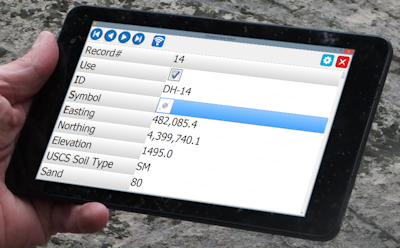 A new Sensor Detector has been added for acquiring data from the Windows7 and Windows8 sensor arrays (e.g. GPS coordinates, compass directions, and tilt-meters) and transferring this information into the RockWorks datasheet for subsequent processing.  Unlike previous RockWorks menus, the Sensor Detector uses an 18-point font and large (64×64 pixel), metro-style icons for easier viewing on tablet computers that are used for field acquisition and processing.  The new Sensor Detector is included with RockWorks Level-2 or higher.

The menu items within the Sensor Detector are described as follows;

Acquire: This is the main menu (shown above) that displays the information that is being detected from the Windows sensors.  These sensors may be contained within the tablet or linked, via USB or Bluetooth connections to the tablet.

Ok/Accept: Clicking on this button will copy the displayed sensor data to the designated RockWorks data columns within the currently activate datasheet row and close the Sensor Detector dialog.

Map: Clicking on this button will display a pull-down menu that provides options for plotting the currently displayed coordinates within Bing Maps, Google Maps, or Google Earth within a single click on the associated icon. 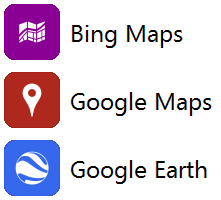 Refresh: Clicking on this button will re-sample the data from the Windows sensors and display it within the Acquire menu.

Setup: Clicking on the Setup button will display a pull-down menu that provides options for that determine the menu size, contents, formatting, and sampling interval; 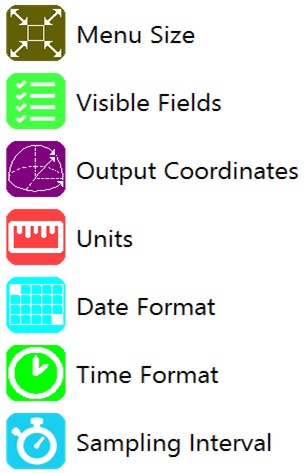 Menu Size: Full-Screen or 800×800 pixels (for displaying on a larger screen).  The menu will automatically rotate if the tablet is turned sideways.

Units: The units used to designate the Error Radius and Elevation may be expressed in feet or meters.

Time Format: The sample time may be expressed using a 24-hour format (European) or 12-hour am/pm format (US).

Sampling Format: Data may be automatically re-sampled from the Windows sensors at designated intervals (between 1 and 60 seconds) or manually resampled by clicking on the Refresh button (described above).  If the sampling method is set to Automatic, the Refresh button will not be visible.  Instead, a Sampling Interval box will appear in it’s place.  Also note that the Automatic option is not available if the Public Land Survey (PLS) data has been selected from the Visible Fields due to the delay caused by PLS conversions.

Cancel/Close: This button will close the Sensor Detector dialog without copying any data to the RockWorks datasheet.

Connections: This is the menu that determines which sensor parameters will be used by RockWorks.  For example, let’s say that you want to view the tablet Azimuth (compass direction) within the Acquire menu.  You would click on the item labeled “Azimuth” within the Item list shown below and then chose the appropriate sensor.  This will vary because you may have more than sensor that is capable of measuring directions or you may have no sensors that provide a bearing in which case you would set the Sensor to the Undefined setting and forgo measuring azimuths or dips.  Another option would be to add an external GPS to your tablet via a USB or a Bluetooth wireless connection. 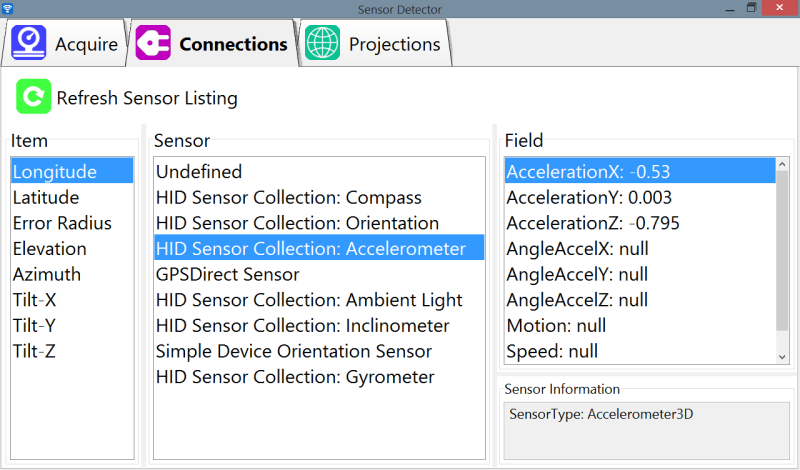 Refresh Sensor Listing: This option will re-poll the Windows sensor array and re-populate the Connections menus within the sensor information.  This is a useful tool for seeing exactly what’s being transmitted from finicky sensors, seeing what new sensors have become available, or seeing which sensors are no longer available (e.g. dead batteries, Bluetooth sensors out of transmission range).

Like snowflakes, every tablet is different.  For example, most tablets have internal tilt sensors (for video games) but not all tablets have satellite-based GPS antennas in which case you may elect to use a Bluetooth (wireless) or USB GPS antenna to send data to the Widows sensors.  RockWorks does not include any software to perform Bluetooth or serial-port linking/communication – that’s a Windows / hardware vendor installation responsibility that may require driver installation.

Item: This is a list of the fields that RockWorks uses to determine the various readings that are shown within the Acquire menu.  For example, the dip-direction and dip-angle are based on the device Azimuth (bearing), Tilt-X, Tilt-Y, and Tilt-Z variables.  The purpose of the Connections menu is to establish which sensors and their associated fields contain the data that RockWorks will use to define the designated item.  For example, the screenshot above was made with a Dell Venue 8 that has some internal sensors (the HID sensors) but we also have a wireless connection to a handheld GPS sensor (GPSDirect Sensor).  The coordinates from the built-in sensor are based on the IP address of the tablet (very inaccurate) whereas the coordinates from the handheld GPS are much better.

Sensor: This table contains a list of the sensors that Windows is currently aware of.  As you click on a sensor, the associated fields names and any current output is displayed within the Field table to the right.  Just remember this; for any given Item, you must define the Sensor and the Field that is associated with that sensor.

Field: This table contains a list of the fields that are available from the currently-selected sensor.  Please note that some of the fields may be blank or “null”.  That’s because Microsoft has created a list of possible fields whereas the hardware developers many not actually populate those fields with data.  In fact, there are many unused fields within the Microsoft sensor array serve as “placeholders” for future hardware improvements including biometric sensors, RFID sensors, etc.

Projections: The coordinates that are provided by the Windows sensors are always expressed in decimal longitude/latitude degrees.  In order to convert these coordinates to other types or coordinates (e.g. UTM), RockWorks needs to know more about the target coordinate system.  This menu provides access to those settings. 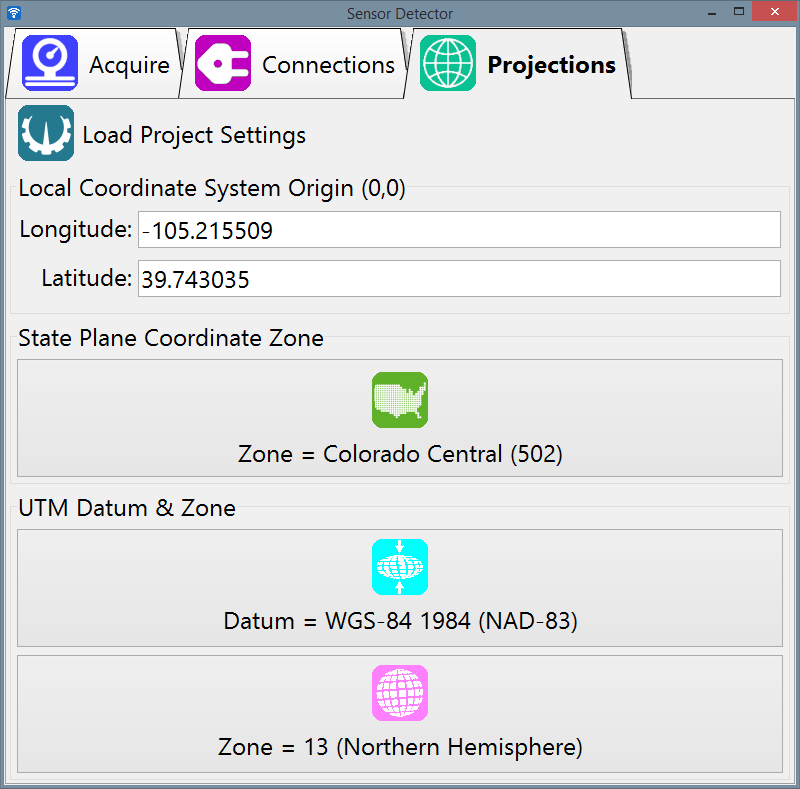 Load Project Settings: This button will replace any of the settings described below with the coordinate system settings that have been established for the current RockWorks project.  This eliminates having to re-enter data if the coordinate system for you project is the same as what you’re acquiring with the Sensor Detector (which it will probably always be unless you’re just using the Sensor Detector for a quick measurement elsewhere).

Local Coordinate System Origin:  The coordinate output from the RockWorks Sensor Detector may be expressed in terms of a local coordinate system given a known “origin” or calibration point.  For example, let’s say that your local gas-station project coordinates are defined simply by feet east or north of the southwest property corner.  If you enter the longitude and latitude for that point within this menu, and configure the Acquire menu to show Local Coordinates, the Eastings (X) and Northings (Y) within the Acquire menu will be expressed in local coordinates.  Note: RockWorks will assume a Cartesian coordinate system whereby X coordinates increase in value to the east, and Y coordinates increase to the north.

Clicking on the State Plane Coordinate Zone button will display a menu in which you will be able to select the zone in which you’re working (see below).

UTM Datum & Zone:  If you have elected to display the XY coordinates within the Acquire menu as UTM (Universal Transverse Mercator) coordinates, it is important that the proper datum and zone be specified in order for RockWorks to convert the Windows sensor longitude/latitude to UTM coordinates.  This is accomplished by selecting the two buttons described below;

The Datum button will display a menu (as shown below) in which you can select the datum to be used when converting the Windows sensor longitude/Latitude to UTM coordinates.  The two most common projections for the U.S. are: 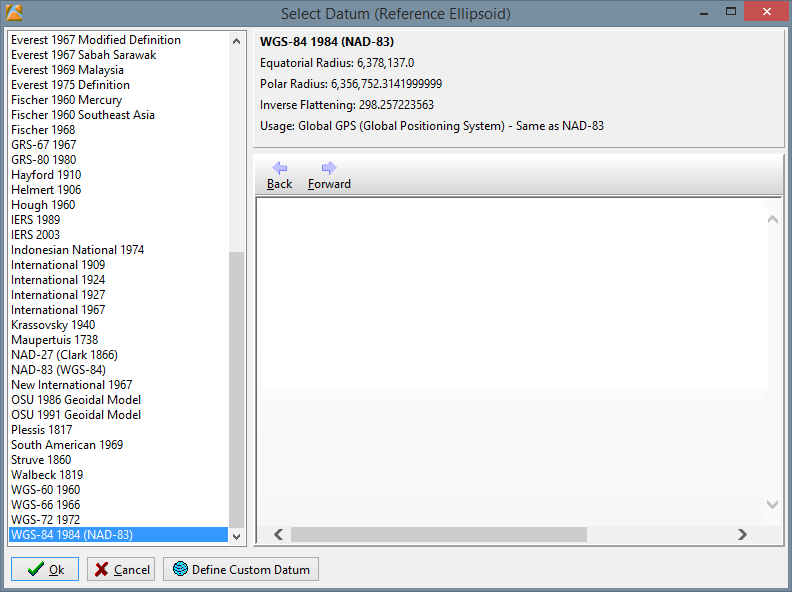 The Zone button will display a menu (as shown below) in which you can select the UTM zone that you’re working in. 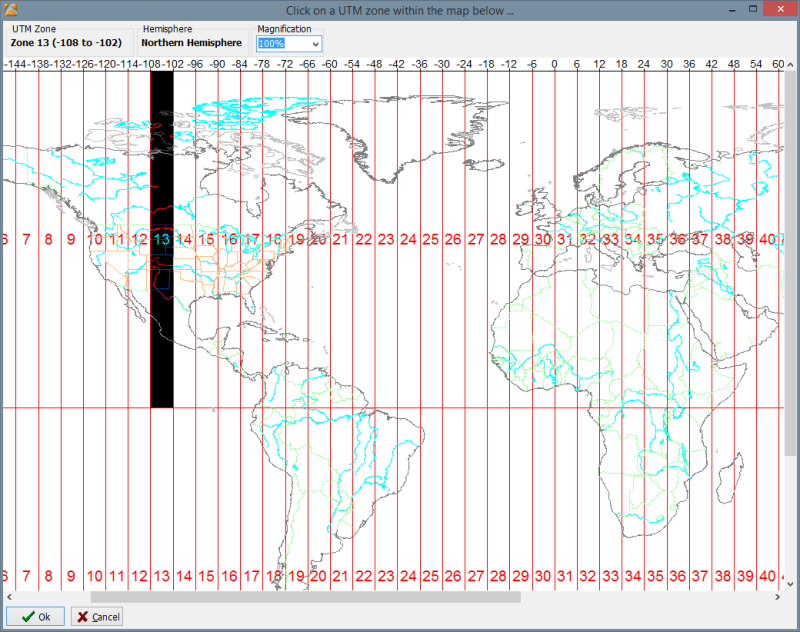 The Sensor Detector may be activated from four different locations within RockWorks; 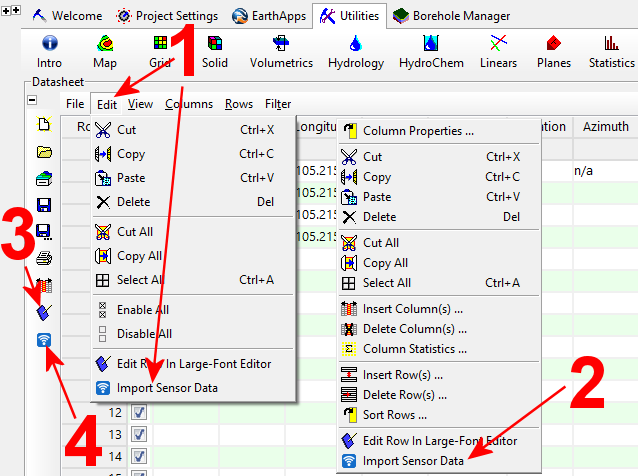 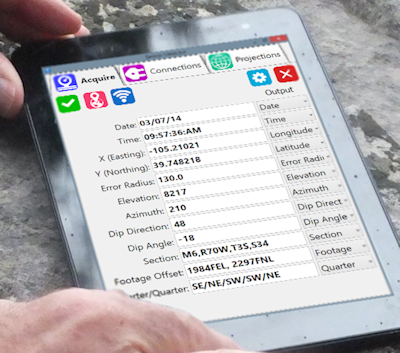