This is the first in a series of posts discussing the initialization of a TOUGH model to represent realistic natural state conditions.  In almost all cases, it is beneficial to run a model to steady state before adding transient boundary conditions, injection or pumping wells, etc.  We’ll give a very simple example first, where we’ve used EOS3 to establish a hydrostatic pressure gradient in a single phase model.

We’ve created a simple three dimensional model with dimensions of 1000x1000x100 meters.  We use a rectangular grid with spacing of 100m x 100m x 10m in the x, y and z directions.  The top of the model is 900 meters below ground surface. We’ll assume that all of the material above the top of the model is saturated with fluid of a constant density, so the top boundary of the model will be at a hydrostatic pressure based on a water column that is 900 feet thick.

The equation to calculate hydrostatic pressure is:

The hydrostatic pressure calculated at the center of the top layer of cells in the model (a depth of 905 meters below ground surface) is 8.97E6 Pa.  We’ve also estimated a temperature of 47.625 °C based on a geothermal gradient of 25 °C/km with a surface temperature of 25 °C.  The global initial conditions for this model look like this:

Figure 1: Global Initial Conditions based on Pressure and Temperature at a saturated depth of 905 meters.

We’ve made the top cell layer in the model “Fixed State”. By setting the top layer to “Fixed State”, these cells will remain at the pressure and temperature conditions defined in the Initial Conditions Dialog. The cells below the top layer will be at a higher pressure which will be calculated by TOUGH. Since this water will compress, the top layer of cells will act as a source to supply the required water.

Figure 2: The top layer of cells are set as “Fixed State” cells and colored in red. These cells will have a constant pressure and temperature equal to the global initial conditions throughout the simulation.

We set the end time of the model to 100K years with a maximum time step of 100 years. TOUGH does a transient calculation. By setting a long time, the transient will reach steady state.

The model reaches steady state conditions after around 1400 years and the resulting pressure gradient looks like the figure below.  Note that the resulting minimum pressure in the model is equal to the pressure at the top of the model.  The model cells below the top cell layer have equilibrated to higher pressure values based on hydrostatic pressure.

To load this pressure gradient as initial conditions in a new model, follow these steps:

Send comments or suggestions on this post to Alison Alcott at RockWare. 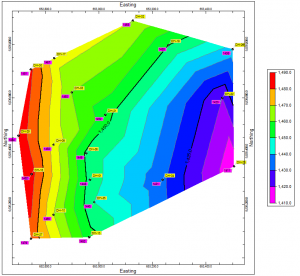 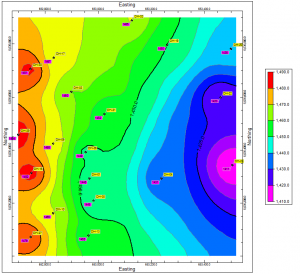 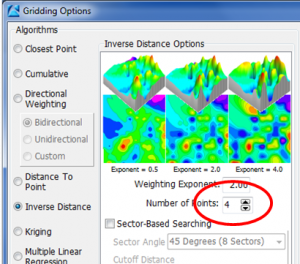 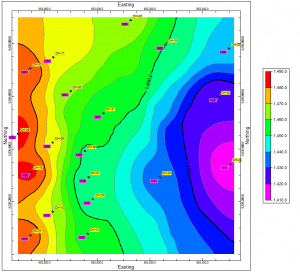 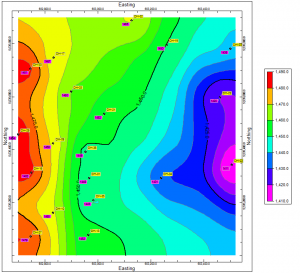 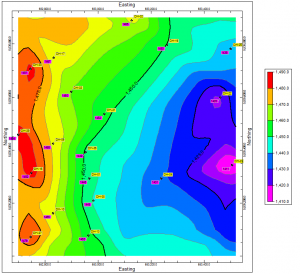 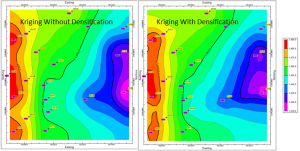 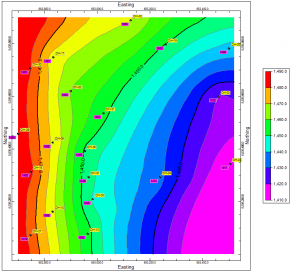