The next RockWorks16 webinar is scheduled for Thursday, April 9th.

Click on an image to watch the associated training video … 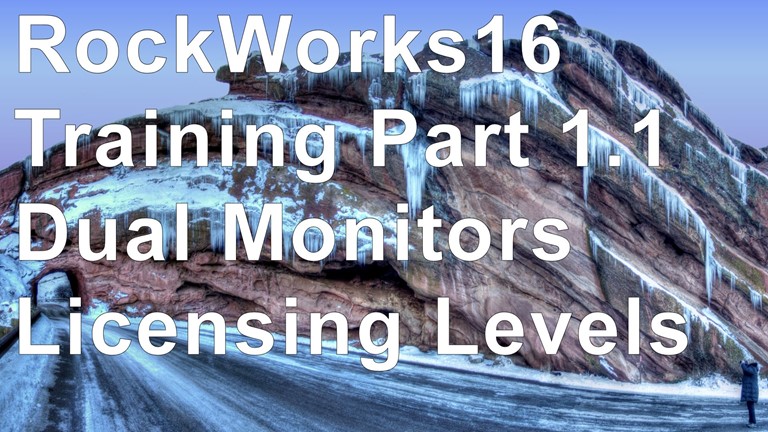 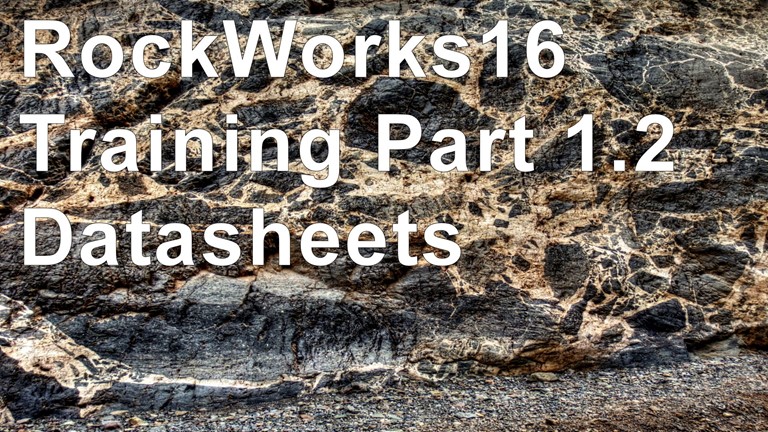 The following changes have been made to RockWorks16 since the previous update (1/21/2015).

(060) Bug Fix (03/03/15/MIW):
The Symbol Legend is no longer corrupted within the ReportWorks program when the properties dialog is selected.

(058) Improvement (03/02/15/MIW):  Stratigraphic panels with zero-length are no longer added to the Fence Panel Selector menu.

(056) Improvement (02/24/15/JCJ):
The AGS import is now more forgiving of errors and variations in the AGS formatted files.  If the Units line is missing a value or the line is missing entirely, the import will compensate.  It will also allow more variation in what it accepts as comma-separated-values.  When setting up the import from the template it will make sure it is using the correct block of data.  The errorlog will now record errors incurred during the import.

(055) Improvement (02/20/15/JPR):
The dialog that appears when an unexpected error occurs has been redesigned.  A new button labeled “Search Support Forum” provides a means to search for more information about the specific error.

(054) New Feature (02/18/15/JPR):
A new option titled “Adjust To 50×50 Nodes Minimum” has been added to the Output Dimension computation menu.  This option (enabled by default) will override the final model dimensions for grids and block models such that there are at least 50 nodes in the x-direction and 50-nodes in the y-direction.  This option was added because many novice users have been creating very coarse grids based on very few data points. 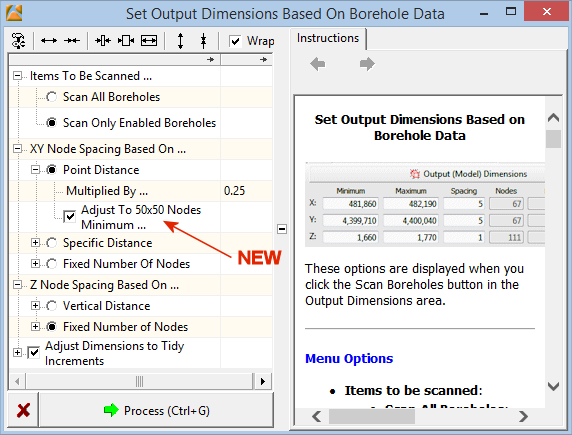 Note: If the “Adjust Dimensions to Tidy Increments” option is enabled, the number of nodes in the x or y-direction may be less than 50.

(053) Improvement (02/18/15/JPR):
The maximum number of increments within the Utilities / Solid / Morph program has been increased from 10 to 100.  This improvement provides a means to create more gradational  transitions between models.  To see an example, click on the link below.

(051) Improvement (02/16/15/MIW):
The maximum amount of addressable memory space that RockWorks can access has been increased as follows;

This increase in addressable memory space means that the likelihood of RockWorks generating “out of memory” errors will decrease in a variety of applications. 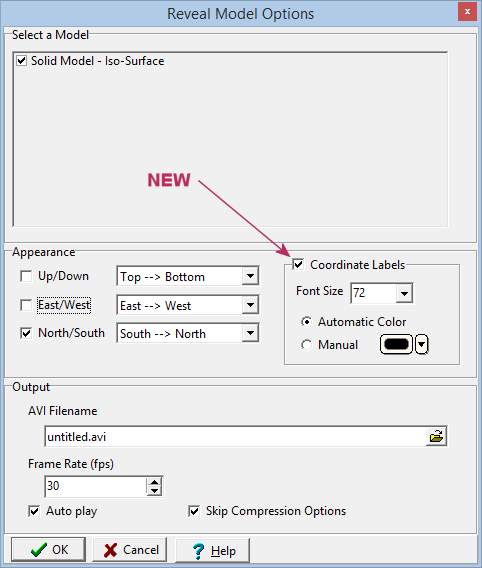 This new capability provides a means to identify the location of features that are displayed within an animation. 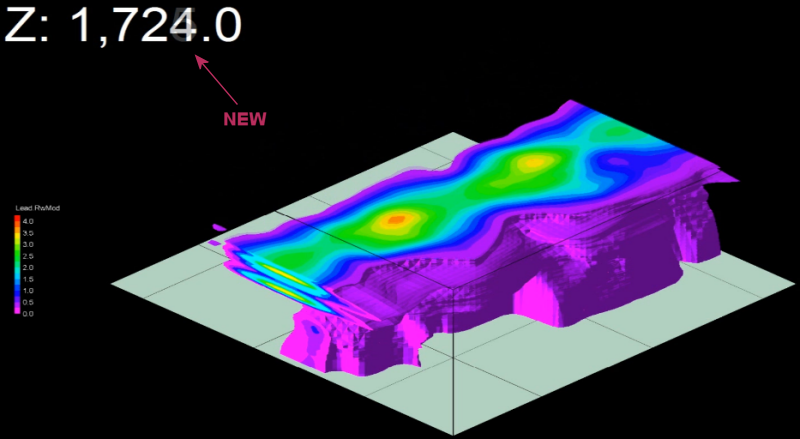 Click here to watch a video that demonstrates this new capability.

(046) Bug Fix (02/11/15/MIW):
Changes to the settings for output Volume, Mass and Area weren’t being updated until the program was restarted. This effected some Volumetrics reports.

(045) Bug Fix (02/11/15/MIW):
The RockPlot3D program now use the proper method for building a fence diagram when using a custom color table.

(041) Bug Fix (02/05/15/MIW):
Very large and/or high-resolution print-outs from the ReportWorks program no longer omit portions of the output.

(040) Bug Fix (02/05/15/MIW):
Very large and/or high-resolution print-outs from the ReportWorks program no longer omit portions of the output.

(039) Bug Fix (02/04/15/MIW):
When plotting Project Dimensions based on UTM coordinates within Google Earth, the perimeter is no longer sporadically shifted to a different UTM zone.

(038) Bug Fix (02/04/15/MIW):
The Parallel Profiles option no longer generates a new model or new grids every time it generates a profile (assuming that the Create New Model option is activated).  Instead, the program now creates a single model before plotting the first profile and then uses that model for all subsequent profiles. 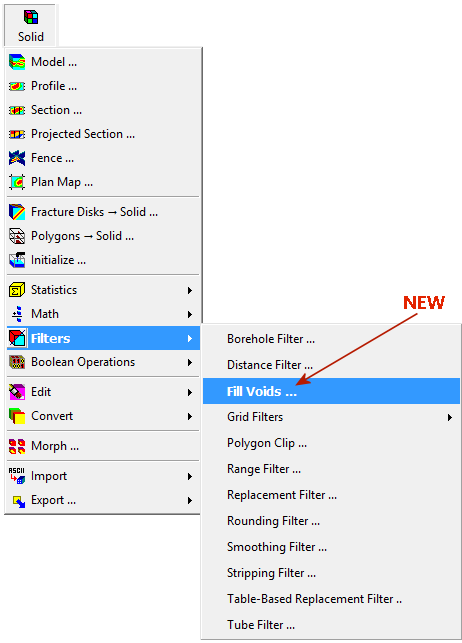 This program will replace undefined (null) nodes within a block model that are surrounded by defined nodes.  Null nodes are defined as nodes that have a g-value of -1.0e27.  The void-filling algorithm is based on the closest defined point. 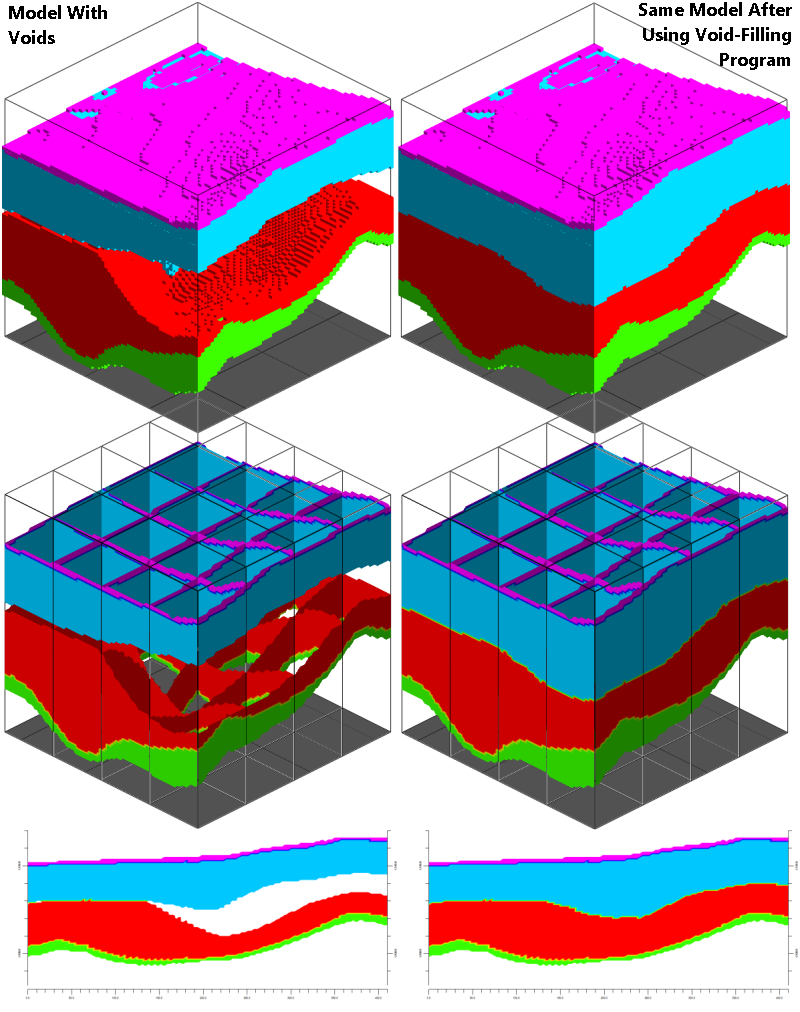 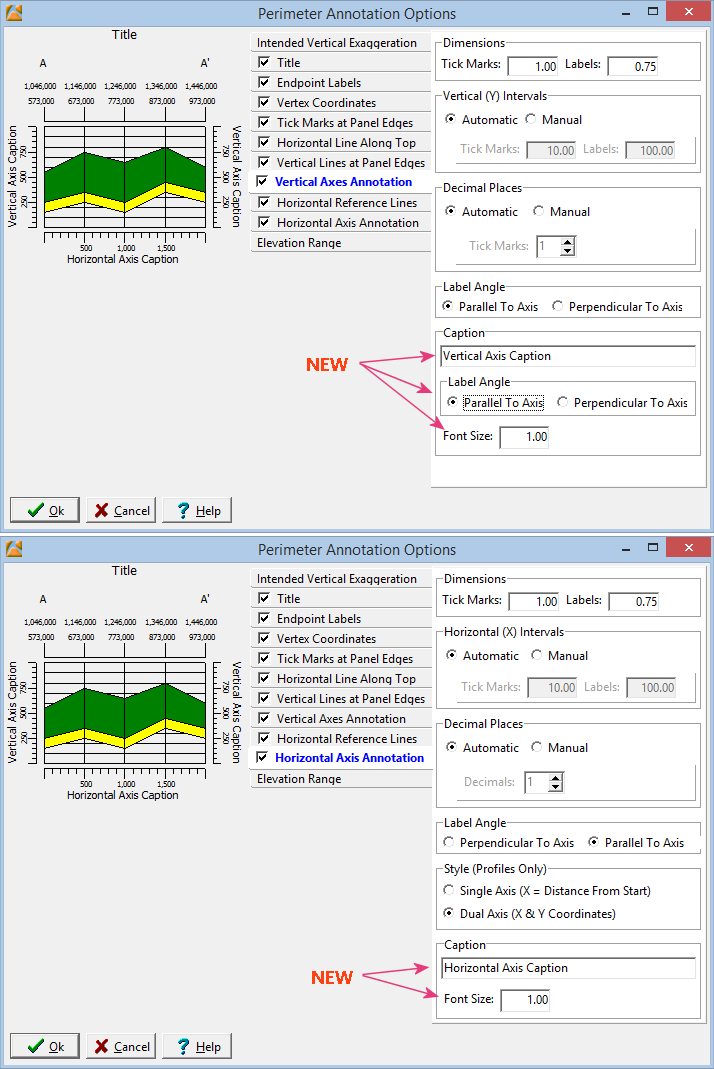 (034) Bug Fix (02/02/15/JPR):
The grids that are specified within the Solid Modeling Options / Smoothing / Warped Smoothing sub-menu are now “remembered”, the next time the menu is displayed. 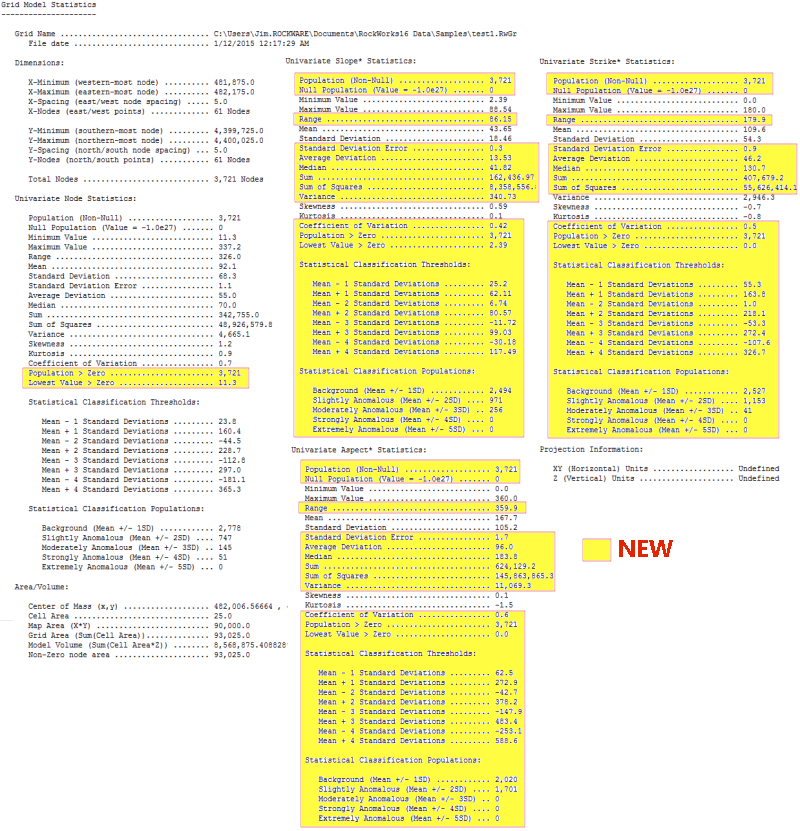 (028-032) Improvements (01/31/15/JPR):
The univariate statistical reporting for the programs listed below now includes the population of points greater than zero and the lowest value greater than zero. 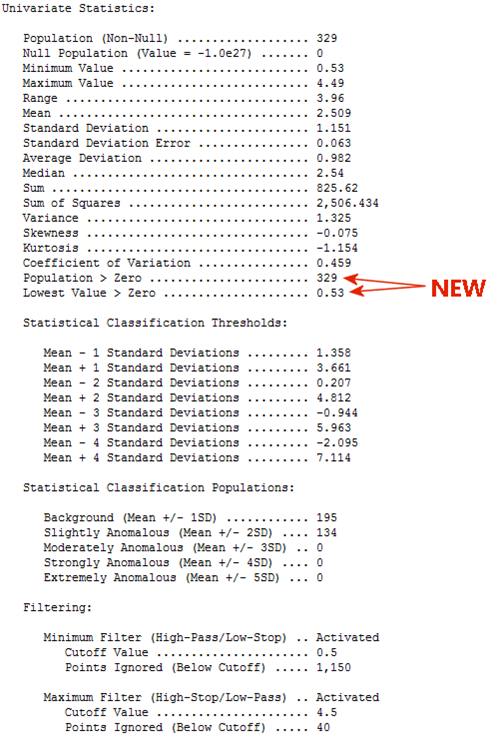 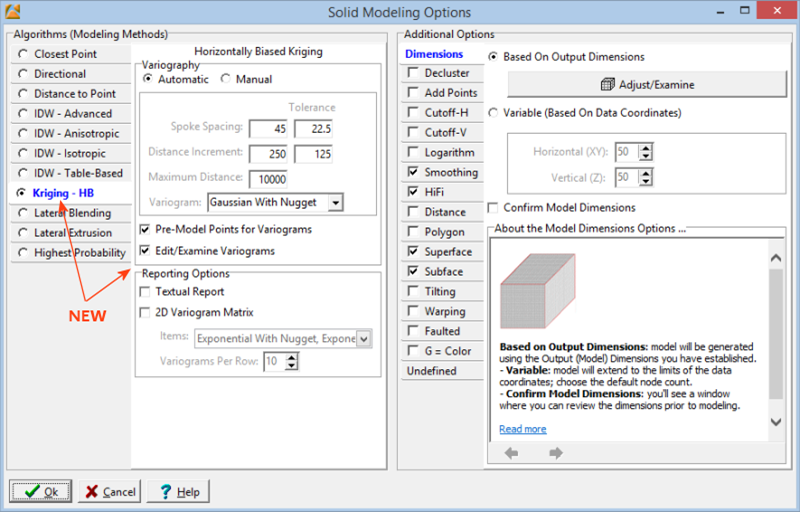 Variograms are created in a fashion similar to the grid-based Kriging with the following differences:

The Kriging process is also performed in a fashion similar to the grid-based griding within the following difference:

The horizontally biased Kriging produces models that are better (but much slower to produce) than those created by the Anisotropic Inverse Distance Weigthing method.  In the example sections show below, notice how the low values (dark blue) within the borehole logs are not as “overshadowed” by nearby higher values within the Kriged model wheres they are completely absent within the Anisitropic IDW model. 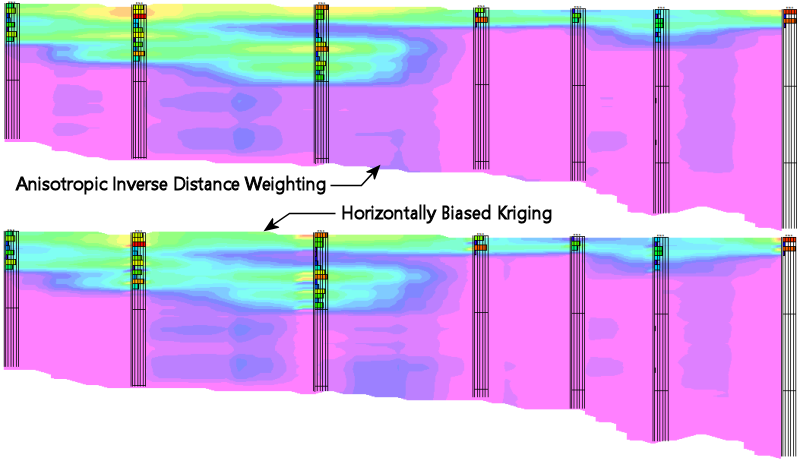 The Horizontally Biased Kriging algorithm is targeted at applications in which the geology is roughly sub-horizontal.  For example, contaminants migrating though buried paleochannels would be a good application for this new algorithm.  Conversely, modeling a complex, hydrothermally altered and fractured precious metal deposit would be better modeled with a higher-end product that provides for variography and Kriging in all directions and inclinations as well as performing separate geostatistics within polyhedral regions (e.g. fault blocks). 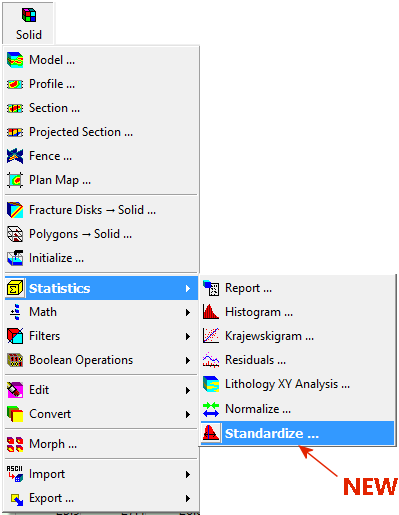 This program will convert all of the non-null node (g) values within a block (solid) model such that new g-values represent the number of standard-deviations from the mean value.  The result is an anomaly model 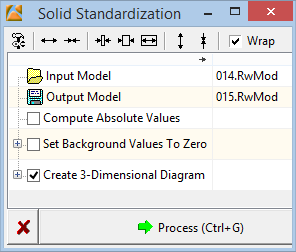 One type of application for this new program is identifying and classifying anomalies based on the standardized values as shown below: 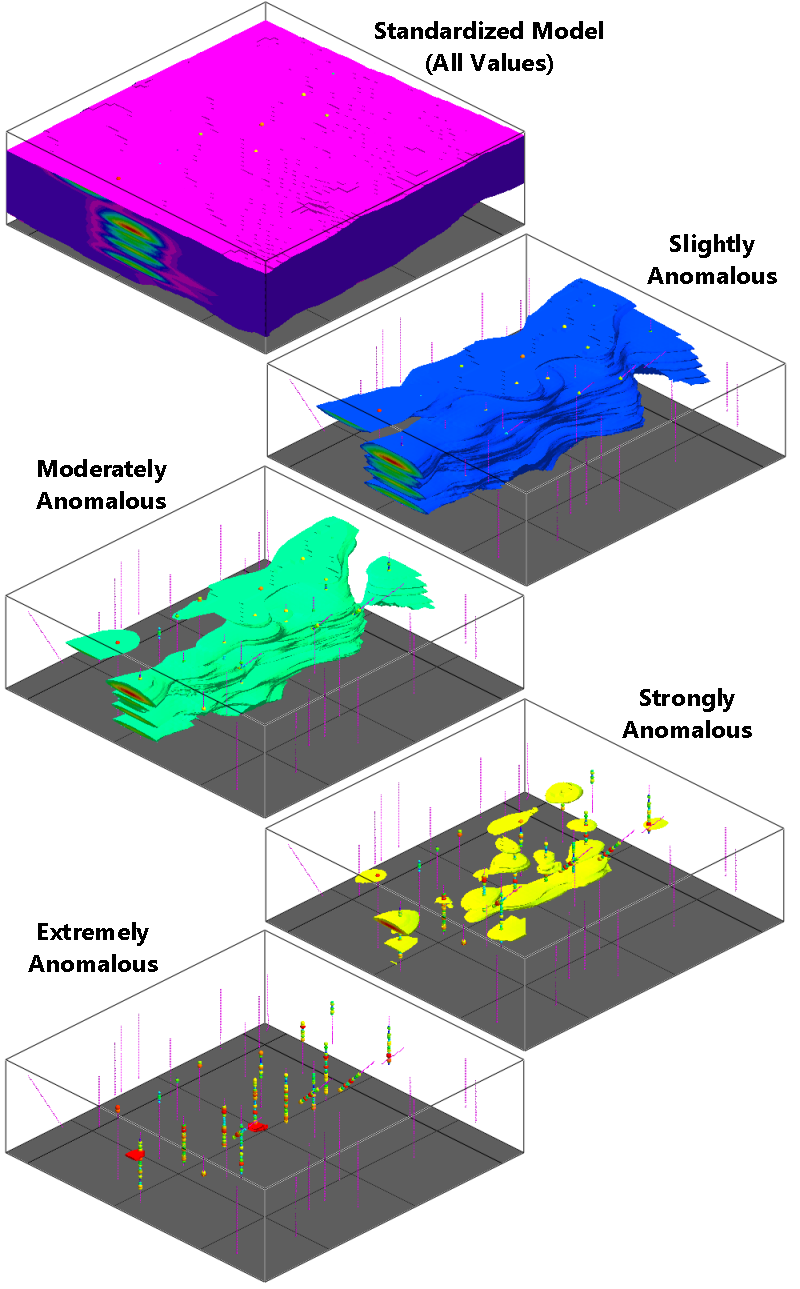 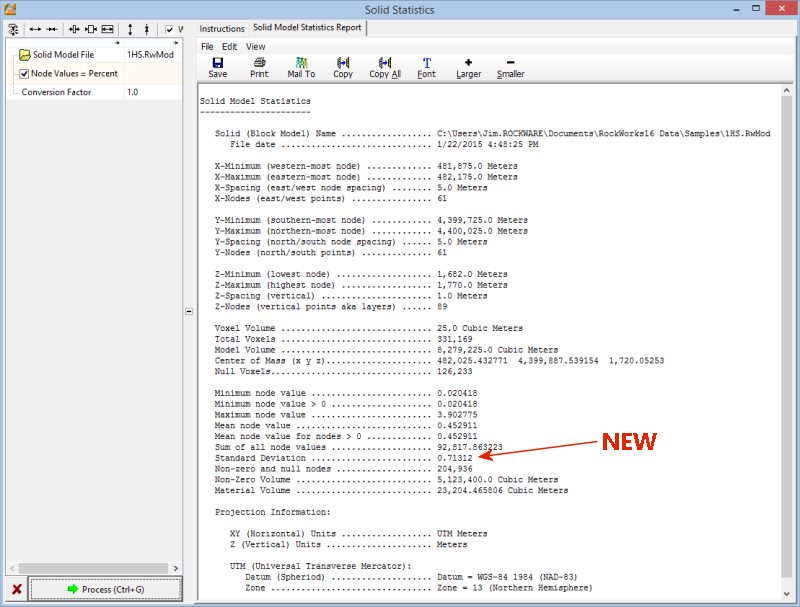 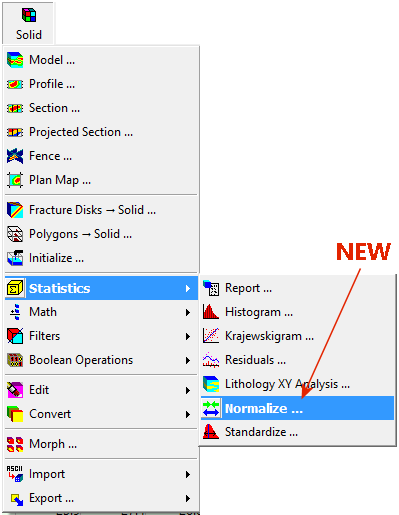 This program will convert all of the non-null node (g) values within a block (solid) model such that they range between two user-specified numbers. 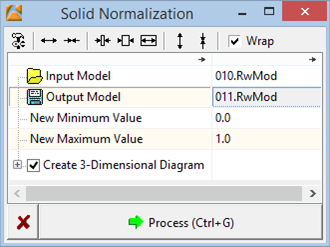 One type of application for this new program is comparing apples and oranges (e.g. looking for a spatial relationship between two types of geochemistry).  By normalizing the two models to the same range (e.g. 1.0 and 2.0) and then dividing one by the other, we can see where they’re spatially related (i.e. the regions where the g-values are closest to 1.0). 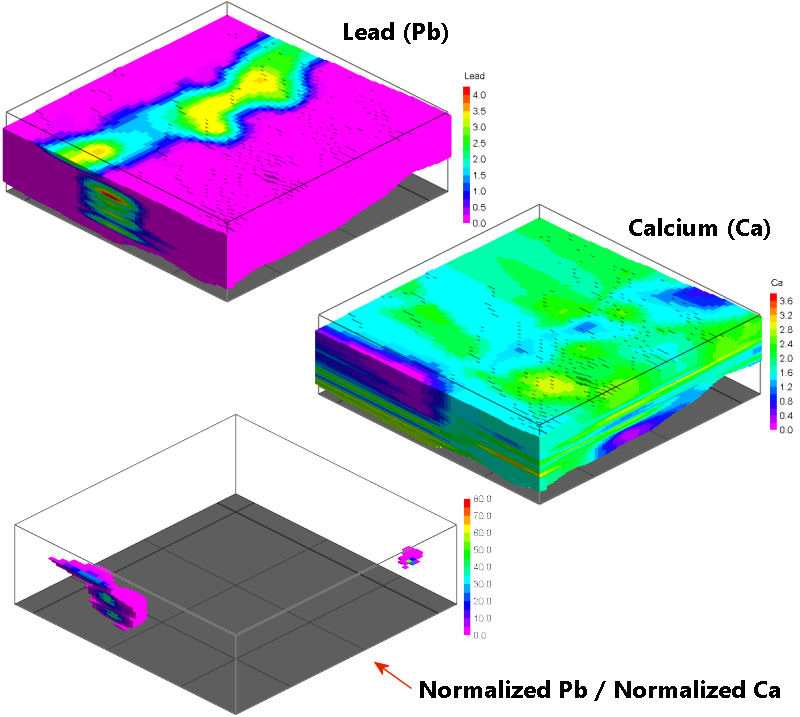 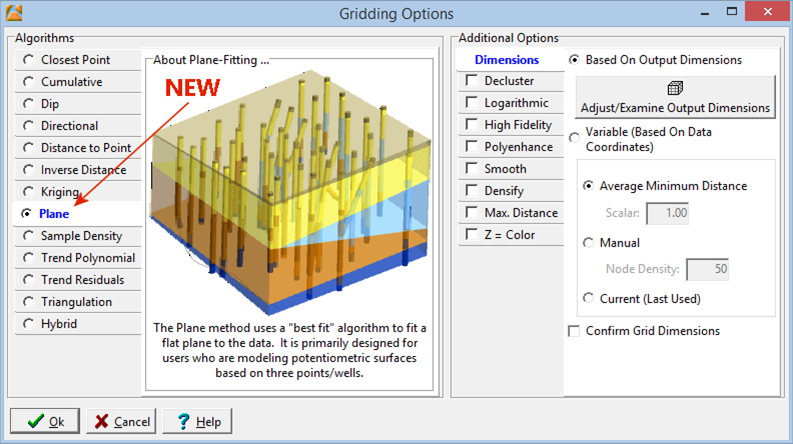 The Plane method uses a “best fit” algorithm to fit a flat plane to the data.  It is primarily designed for users who are modeling potentiometric surfaces based on three points/wells.